We only spent one week in The Gambia, so I can’t make any judgements about it. But let me give you the impressions that this tiny African country left in me.

Visa: See the picture below. Most EU citizens don’t require one, but there are exceptions. Americans do require a visa.
Languages: English (spoken by majority of the people in big cities), mandinka, wolof, fula
Mandinka vocabulary:
Salama alaykum – alaykum salam (greeting)
Sumole- how are you?
Kortanante- I’m fine
Abaraka- thank you
Currency: dallasi (1€ = 51 dls) – as of July 2017
Prices:
Simcard (Gamtel): 10 dls
Internet 500 mb: 175 dls
Mango: 10-20 dls
Collective minibus in Banjul: 8 dls
Double room in a guest house (1 night): 600-700 dls
Meal in a restaurant: 120-150 dls
Beer: 45 dls
(You can do the math yourself, but you see that it’s pretty cheap)

I guess Peter entered this country illegaly. This is the official website of The Gambia’s immigration department.
As you can see, there is every single european country on the list EXCEPT Slovakia. 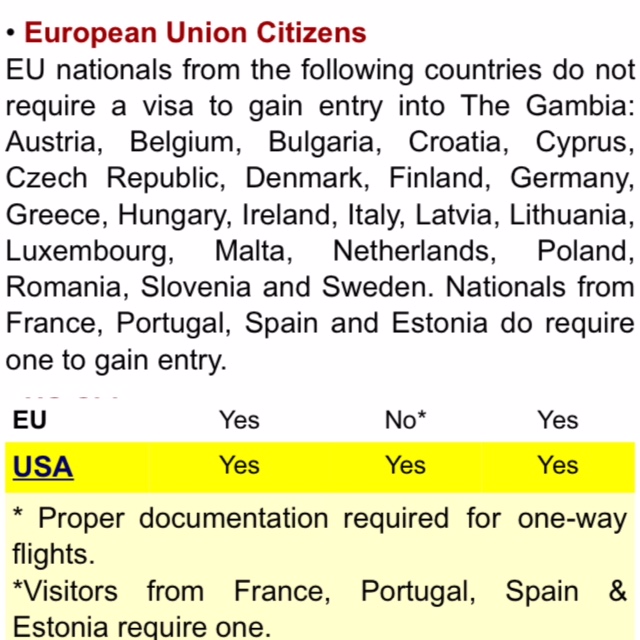 Until the last moment we didn’t know to which group he belonged- does he need a visa to enter or does he not? Well, nobody cared at the immigration office at the airport and they let him go, probably taking Slovakia for Slovenia (as many people do anyway). Welcome to The Gambia!

The weather: Only crazy assholes like us go to The Gambia in the rainy season.
As soon as we left the airport, we felt what rainy season in the Gambia is like. I think I’ve never experienced such humidity. It was extreme. You sweat just sitting and not moving. You sweat asleep under the fan. Let’s put it this way-you sweat like a motherfucker whatever you do. The first rain hit us as soon as we stepped out of the car somewhere 100m away from the guest house we were supposed to stay in. It rains so heavily during this time of the year that within 10 minutes the street was flooded with water up to our knees. We had two options: wait till it stops raining for god knows how long or take our shoes off and go in the water. We chose number two. Dirty water up to your knees with something occasionally hitting your feet (I really don’t wanna know what it was), no lights so you see absolutely NOTHING, heavy backpack on your shoulders, everything is super slippery and you are soaking wet. But the feeling when you step in the guest house! It’s like paradise.
It didn’t rain the rest of the week though, but the humidity & extreme heat (33-37 degrees) combo is killing you anyway.

The people: Reggae boys in a muslim country
Banjul (capital city) and Serrekunda (biggest city) nicely surprised me. Maybe my expectations were too pessimistic and I was awaiting a lot of hassle, having to pay for every answer to the silliest question you ask and so on. Well I was kinda wrong. I say kinda, because some of this still applies, just in a smaller amount that I would have expected and it’s strongly outweighted by the good manners. Of course you get charged higher prices than the locals, but that’s quite normal and foremost understandable, as I discussed in one of my previous posts click here. But apart from that, people are really, really nice, welcoming, always willing to help (without wanting any compensation for that) and generous. One guy even paid the taxi for us (!). When we went to the traditional sunday reggae party, we were offered a beer and a joint… I know it sounds silly but you don’t get this in this part of the world when you are a white tourist very often.
Back to the beer and joints-every Sunday there’s a reggae party at the beach in Serrekunda, and it is a truly great experience. In a predominantly muslim country, where most people don’t drink, all of a sudden you are hit by the heavy smell of marihuana and all you see are stoned black guys on the beach making lazy reggae moves into the crazy live reaggae music played by a crazy dj who is constatnly interrupting the songs by shouting things like “party with dignity!” or “show me your sign!” in the microphone. While chatting with the guys over a joint, one of them tells you that “he can kill a cow” and after seeing your surprised reaction he starts showing you pictures of a dead cow on his phone. An event not to be missed once you are in The Gambia.
Getting further from the big city though, the longer and more suspicious looks you get and the more “toubab, toubab” (western African word for a white person) you hear (actually you hear it all the time). Don’t let the first impression fool you, as soon as the people get used to you and as long as you are nice and respectful to them, they will open up and will confirm you that The Gambia is a really great country. Learn at least the basic phrases in Mandinka (the most used local language), greet the people with salam alaykum, talk to them. The universal truth applies here just as everywhere else: A smile can change the world. 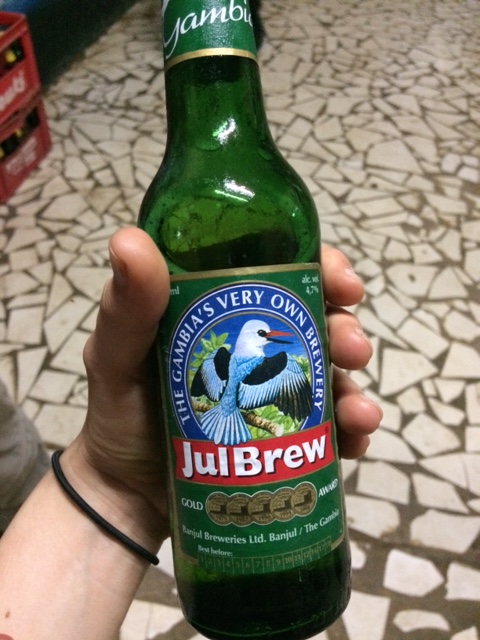 Things to see: we didn’t see anythign particularly interesting, but we did on of the most interesting things ever!
If you look at The Gambia on a map, you will notice that it is very narrow. Actually, in the narrowest part, it is only 24 km wide (from north to south). So what did my boyfriend Peter come up with? “24 km? That’s a good distance for a half-marathon!” And that’s exactly what he did. That’s why we went to the small town of Farafenni near the northern border some 120 km from Banjul inland, in the country’s narrowest part. Starting at the northern border, crossing the river Gambia and then finishing at the southern border, it took him some 4 hours . I will put the link to the vlog on our youtube channel as soon as the video is out! 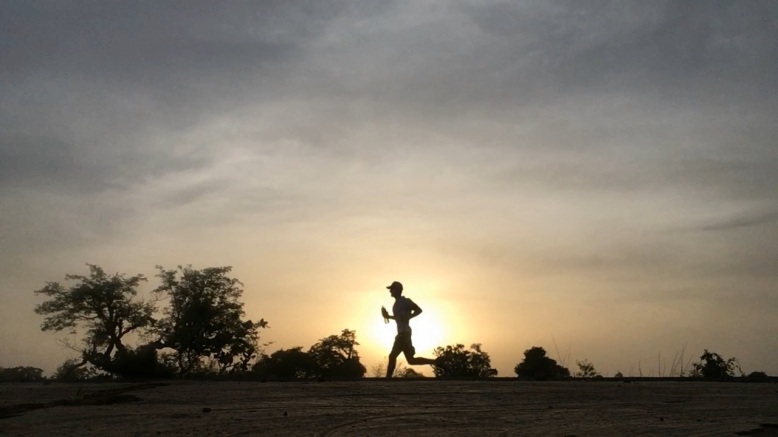 My way of relaxing
Me, I said no thanks to this wonderful opportunity of running 24 km in 37 degrees’ heat and humidity.
We stayed in Farafenni 3 days and I have to say I really enjoyed it. Strolling around the town looking for toilet paper (:D), I realized that this is just the perfect holiday for me. The heat makes you turn the african chill out mode on, it makes you walk like 10 times slower than you normally do (cuz if you walk normally you will die or at least bath in your own sweat) and simply don’t care. Something is not working now? You have an email to answer? It will wait, it’s too hot to even think now. Later, later. I am an extremely active person which hates to be doing nothing even for one hour, and I guess that this is the only part of the world and the only way than can actually make me chill out. For real. Maybe that’s why I love traveling to Africa. Because the differences make you think differently. Change you. Enrich you. Anyway, all three days I was just (slowly) walking around the town, getting to know the normal prices, buying mangoes and some weird local fruits, going to the (only) “restaurant” (it was far to be called a proper restaurant) to eat local food and chat with the waitress, buy credit for my phone and chat with the telephone company guy, go to buy cookies for breakfasts to two stores, one with a seller from Mauritania and the other one from Guinea and chat with them, go to get braids and chat with the local girls. And then slowly walk back to the guest house, passing by the donkeys, goats and pigs, children waving at you screaming toubab toubab! feeling that every moment the locals get more used to you and you get more used to them, too. And everything suddenly feels settled. This is my way of relaxing. Enriching yet calm. Doing nothing in particular yet experiencing. 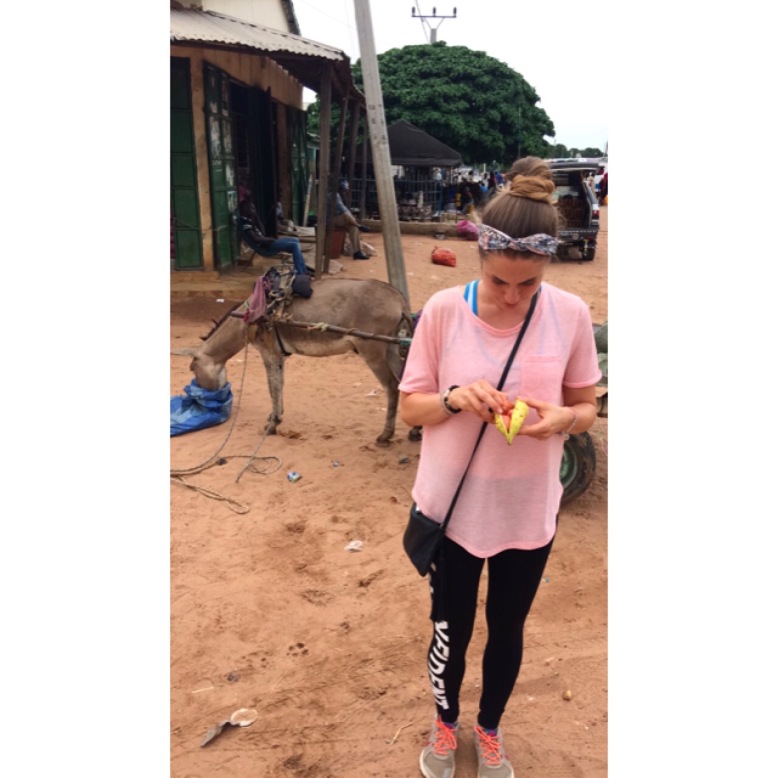 Overall, we had a very nice stay in The Gambia. Peace out!