The World Bank has recently published a study that has a pretty catastrophic conclusion – in 50 years we will drown in waste. Sounds pretty harsh right?
Hard to say if this prediction is right or wrong, probably not, since we’ve already heard a lot about the “breaking point”, nevertheless such news raise questions and serve as a great way to raise awareness of our ever-growing problem with waste, which is good.

There is no doubt that the if we keep the current, consumption-based economic model (consume, consume, consume, the more the better!) combined with the existing waste management system (=recycling), we will end up in a very unpleasant situation in a couple of years.
The equation is simple here: we are producing more and more waste – actually, we have produced more plastic during the last 10 years than in the entire of the last century. Repeat that sentence twice in your head. Whoa, right? The waste management systems are slowly improving, but there are nowhere near to keep up with the pace of the growing amounts of waste. Recycling is just a moderation to the problem, but not a solution. Recycling might be a good excuse for large corporations or governments, but once and for all: it’s not going to get us rid of the waste.

So, what now?
Our relationship with packaging, and especially plastic, seems like a great party with a very bad hangover. Years ago we used to carry our groceries mostly in heavy, glass (but reusable) containers. Then, sometime in the 1960s, the plastic started to be used widespread, which was so convenient not only for the customer, but it also went hand-in-hand with the growing importance of marketing (packaging sells!). On the consumer side, plastic is great-is it light, durable and overall highly practical. So the plastic party started! We started producing more and more plastic packaging every year. It was so cheap that it didn’t need to be designed for several uses, single-use was pretty fine! So convenient! Buy-use-throw away. Simple as that. This party rocks!
But then the hangover came. We realized that now there’s so much waste left behind and this waste is so durable that it’s going to be here with us for centuries, and we don’t know what to do with it. Someone came with the idea of recycling, but that now seems like a desperate shot in the dark in the enormous amounts of plastic we are dealing with. It’s been some 40 years since we started recycling and given the current state we are now starting to realize that it is not going to save us. At the same time, we come to see more clearly that prevention is the only solution. Preventing the waste from being created at all. Sounds simple, huh? But how?!
…
And so we are sort of coming back in time to the good old ways. Take for instance the zero waste (packaging-free) stores – they look somehow similar to the grocery stores from the beginning of the 20th centuries, don’t you think? Reusable containers, mason jars, the return of the milkman…
It is all good and I appreciate it greatly, but once the people got used to the convenience that the single-use plastic brought them, it is impossible to make them go back to the inconvenience. Therefore, these efforts will always be only for the handful of mindful people that have the environmental responsibility in their heart.
To kill the single-use and cut down the waste we need to-date, functional and foremost mainstream solutions. 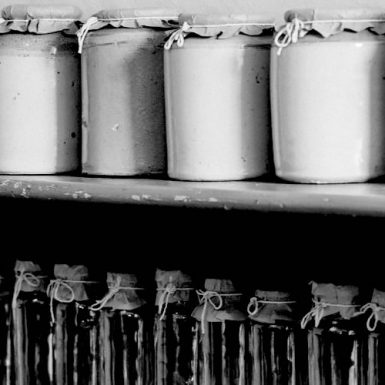 Either we find a way how to dispose of the waste in a non-harmful way to the environment (which sounds logic, but I don’t think it’s possible), or we completely change the logistic systems and base them on reusability.
Now, I don’t have an answer for whether we’re going to drown in waste or not. I only know that we have to act. Faster the better.
As consumers, we need to demand more sustainable solutions.
The businesses have to change their models from linear to circular ones.
___
Note: Linear means the existing pattern of make-consume-throw away. Opposing to that, circular means make-consume-reuse. Reuse in the case of packaging can mean either reusability of the packaging, or using the waste as a source for production of a new one.

Do you feel a bit more optimistic now?
To be continued next time!
T.

One thought on “Are we going to drown in waste soon?”