After one year since my last trip to Cape verde, I finally took off again! This time I headed to my beloved Mexico. I’ve already been there five years ago, as a volunteer. The purpose of this journey was totally different this time – I went to meet my fiancée’s family and enjoy a family vacation. Here are the highlights of my trip.

Cancún
We started the trip by celebrating the New year in the renowned tourist paradise Cancún. When it comes to the beaches and the seaside, I’m not going to tell you anything different than other people – the beaches are simply beautiful. White sand, turquoise water. What else?
However, when it comes to the city itself, my impressions are rather mixed. It’s not really Mexico. To me, it was something between Las Vegas and French riviera, mixed with American shopping malls and highways. Which brings me to an important point – rent a car! This is not Europe, Africa or Asia my friends, this is America at its best when it comes to transport and moving around. Get a car. The distances are always big and the public transportation is bad. There are long-distance buses running between the major cities like Cancún, Playa del Carmen and Tulum, but believe me, if you want to enjoy the vacation, be independent and see as many things as you like, renting a car is the best option. Although not the most eco-friendly one, but there’s nothing eco-friendly in Mexico. Ahm.
My recommendations:
Playa Marlin
The entrance is free and there were not so many people, good spot to relax and enjoy the waves.
Isla Mujeres
Good for a day/half day trip. There is a ferry from Cancún going there every 30 minutes and the journey takes some 15 minutes. Rent the golf cart to go around the island. We went to the Punta sur, which is the most eastern spot in all Mexico. There were very little tourists compared to the other half of the island and some parts of the road actually felt like the real Mexico. A nice escape from the shiny Cancún.

I didn’t really see more in Cancún, as we only stayed 2 days there and most of the time we were with the family on the beach or eating. Therefore I cannot give you any more recommendations, sorry. 🙂
Anyway, I think it’s okay to skip this place if you don’t like tourists and luxurious hotel resorts.

Akumal
We continued to a little town called Akumal, some 1,5 hours drive from Cancún, direction Tulum. Akumal is one of the many tourist destinations on the Riviera Maya. The good thing is that this is not a resort but rather a couple of complexes with small apartments on the beach. Our apartments were called Akumal Sur and it was just…lovely. The owner was a kind, old Mexican man and the apartments were right on the beach, done in a cute Mexican style. A good place to relax and enjoy the stunning seaside and a strategic spot for making trips. If you happen to be in the town of Akumal, I recommend the Taco Maya restaurant. Their burros (burritos) are just something out of this world!
As for the trips, a must-see are the cenotes – a natural pit, or sinkhole, resulting from the collapse of limestone bedrock that exposes groundwater underneath (source: Wikipedia). In other words, magical little lakes with crystal clear water surrounded by caves.
My recommendations?
Cenote Dos palmas
Head to the Cenote Dos ojos (which is actually the most famous one), then at some point turn right (you will see the sign) and surprisingly enough, you will reach a cenote free of tourists, hidden, unknown. The entrance was 100 pesos and the experience was absolutely breathtaking. Take snorkeling gear with you!

Cenote Carwash
This cenote is closer to Tulum, after entering the city, you turn right on the road to Cobá. It is an open cenote – you don’t enter a cave like in the previous case, it’s actually more like a little lake. However, the surrounding nature, the underwater life and the crystal-clearliness of the water will take your breath away the same way as any cave cenote. There were not many people either and the entrance was around 100 pesos. Tulum
Tulum, Tulum…who hasn’t seen it on Instagram? This chique little town seems to be the favourite destination on the Mayan riviera for all the bloggers, travellers and youtubers.
Well, I have to admit that it is chique. The bistros, cafés, bars and boutiques around the main road are really cool! It’s definitely worth the visit, as well as the famous Tulum ruins. Prepare for loads of tourists and an ugly, cringe tourist infrastructure (souvenir shops, annoying sellers and scammers), but the ruins themselves are worth it. Quite exceptionally, they are built very close to the beach, which is what makes them so beautiful. The ancient buildings surrounded by the lush green nature and the turquoise sea is a killer combination. 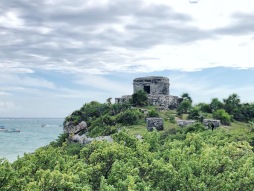 Week 2
Salamanca, León, Guanajuato
After Cancún, we moved on to Alfonso’s hometown, Salamanca, in the state of Guanajuato. Btw, Alfonso is my fiancée, just to make things clear. 🙂
Salamanca. Well, well, well. The main dominant of this 300,000 city is an oil refinery. Do I need to say more? 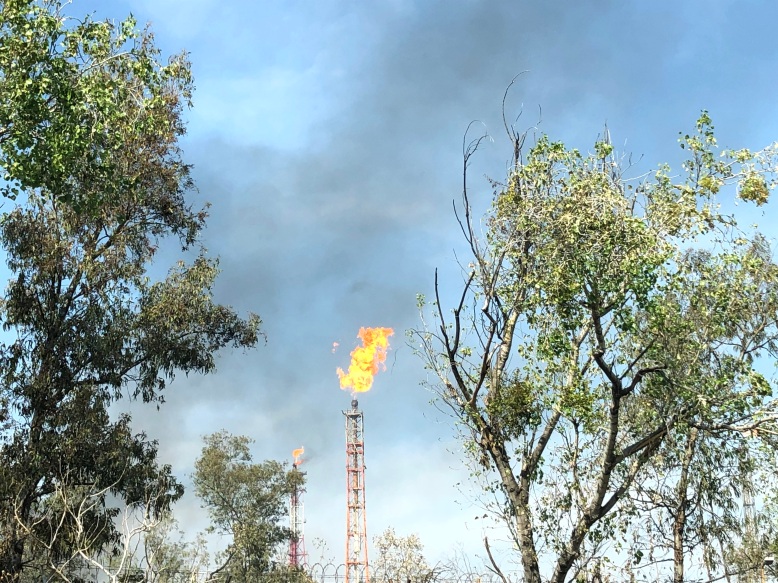 But apart from that, it is a nice, truly Mexican city. Finally real Mexico! 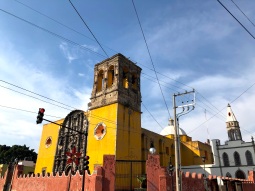 We made a couple of trips during our stay. This is what I recommend:
Guanajuato
I fell in love with this city when I first went there five years ago. It’s so charming. So colourful. So bright. So hilly! Just see for yourself. To me, it’s definitely one of the most beautiful cities in the world, if not the most beautiful one. 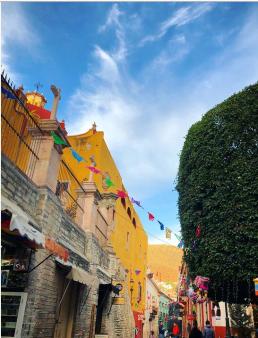 León
León is very pretty. I recommend you to go to see the city center and then, if you have time, do some shopping. It might sound weird from someone like me, who tries to be a minimalist and buys clothes mostly in second hand stores, but León is famous for its leather goods production. There are countless shops selling bags and shoes for good prices. Plus it’s all local production!

Week 3
Mexico City
Mexico City is…huge! To me, it was a city of contrasts – in a good sense. On one side, you have the upscale neighbourhood of Polanco, with all the modernist buildings, fancy shopping malls and skyscrapers, but just a few blocks further you’ll see a traditional market under a bridge, street sellers with corn, mango and other delicacies and the typical small colourful mexican houses and dusty roads. 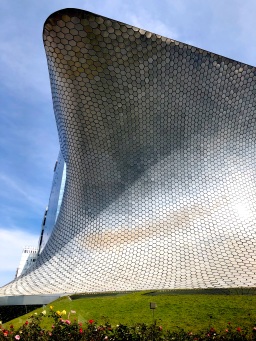 My personal highlights
Museo de antropología
Museum of anthropology is not a must only for the fans of history, but for everyone who visit Mexico City. Its surroundings (The Chapultepec park and castle) are beautiful and they serve as a weekend getaway spot for the locals, so it’s actually a great place for those who want to feel the local vibe. The Museum itself was an architectonical gem for me. As for the exhibition itself, I guess it’s really well done, as it got the attention of such a history ignorant like me. 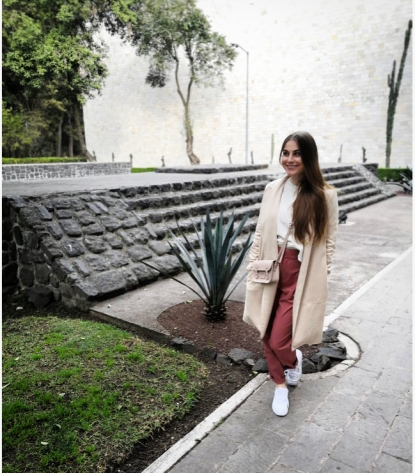 Museo Soumaya
Another architectonical miracle, where you can take really cool pictures (Instagramers – watch out!), is situated in the heart of the upscale neighbourhood of Polanco. It’s a private collection of art of one of the richest men in Mexico, Carlos Slim. It has everything from historical artefacts to paintings and sculptures, from medieval art to modernism. Even if you’re not a big fan of art or history, give it a try – the entry is free.
Teotihuacán
The historic site where you can see well-preserved ruins of the ancient Teotihuacán city is some 30-40 minutes drive from Mexico City. We went by car, but there are buses running regularly, as this is a major tourist sight in this area. This was quickly confirmed as soon as we arrived there and saw the crowds of people literally everywhere. Nevertheless, it’s totally worth it. The pyramids that you see in Teotihuacán are impressive. Bring a sunscreen and a sombrero with you though, as there’s literally no shade. Count on spending at least 3 hours there and walking a lot, the Teotihuacán complex is quite immense.

Centro histórico
Centro histórico, aka the historic centre, is a must in every city, and Mexico is no exception. The area around the Zocalo metro station has an amazing vibe, very different to any other part of the city. Yes, it’s slightly more touristy than the other areas, but still much more local-ish than any other city center that I’ve seen. It’s cute, it’s old, it’s picturesque. I highly recommend to go to the Cathedral at the Plaza Zocalo, which is a unique experience because of its crooked construction caused by the earthquakes. Warning! You might get a bit dizzy there. 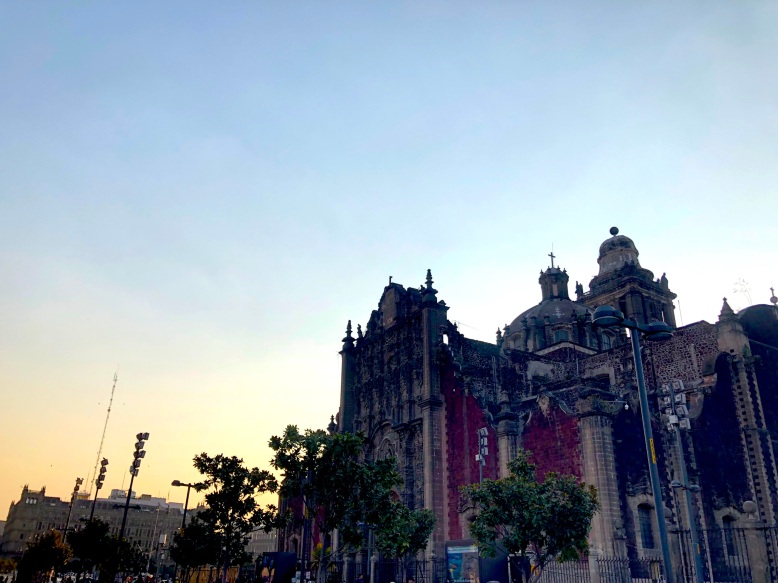 Sanborns
Sanborns is a Mexican chain of department stores and restaurants and no matter how weird it may sound, it’s always a good choice. They serve Mexican dishes, which you can either choose from the menu, or get as much as you like from the lunch buffet. My man took me there the first day and I didn’t want to eat anywhere else ever since. I love their homemade fruit juices and the selection of pastries. Pricing is good too. I highly recommend the Sanborns in the Centro histórico, in Casa de los Azulejos. The building is just out of this world. It’s floors (or walls?) are also a bit crooked, as in every other old building in Mexico City, but that’s just a cherry on top of all this baroque/oriental beauty. Instagramers, watch out again – this building has an extremely photogenic tiled facade.

Palacio de Bellas Artes
Another beautiful building. We didn’t go in, but to me it was enough watching it from outside – because its architecture is simply wonderful.
Torre latinoamericana
A great place to see the city from above. The view absolutely worths the ticket (it was around 200 pesos) – from the top you will realize how immense the city actually is, as you won’t be able to see where it ends. Strange experience from a “small” city like Prague. 🙂

Getting around
We used mostly Uber or Didi (it’s a Mexican Uber, but cheaper) to get around. I think it’s generally safe and quite cheap. I cannot say that’s it’s the fastest way to get around, as the traffic in Mexico City is unsurprisingly a madness. We tried the local metro a couple of times, which is super cheap and it works generally well, but be prepared to sweat while being squeezed between hundreds of your fellow commuters. I highly recommend to watch out for your things and be careful.
Food
I haven’t had a bad experience with food except for one touristy, american restaurant in Akumal, where the food was just…meh. Otherwise, Mexican cuisine is basically always tasty, delicious and I personally love it. Forget about the Mexican food is really spicy cliché, the spicy salsas are usually served apart. Also, there are many Mexicans who actually don’t like spicy food. Prepare for a lot of meat, cheese, tortillas and super-sweet desserts. 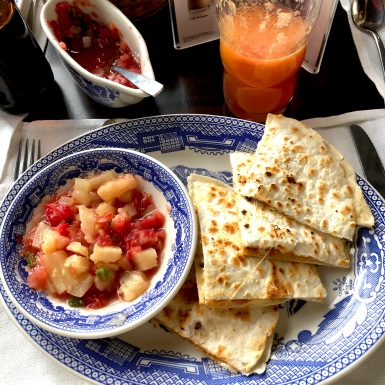